It is the second time I am visiting the most beautiful mansion in Thailand, or even better, in Asia. And here is the story: Jim Thompson, American, Soldier, Secret Agent. He was born 1906 in Delaware and was an architect prior to World War II. He volunteered for service in the US Army, campaigned in Europe and was later sent to Asia. However, the war ended before he saw action. He was sent to Bangkok a short time later as a military officer and fell in love with Thailand. After leaving the service, he decided to return and live there permanently.

The hand weaving of silk, a long neglected cottage industry, captured Jim Thompson’s attention, and he devoted himself to reviving the craft. Highly gifted as a designer and textile colourist, he contributed substantially to the industry’s growth and to the worldwide recognition accorded to Thai silk.

He gained further renown through the construction of this house combining 6 Teak buildings, which represented the best in traditional Thai architecture. Most of the houses were at least two centuries old and were easily dismantled and brought to the present site, some from as far away as the old capital of Ayutthaya. 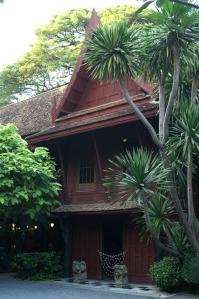 In his quest for authenticity, Jim Thompson adhered to the customs of the early builders in most respects. The houses were elevated a full story above the ground, a practical Thai precaution to avoid flooding during the rainy season. The roof tiles were fired in Ayutthaya employing a design common centuries ago but rarely used today. The red paint on the outside walls is a preservative often found on many old Thai buildings. The chandeliers were a concession to modern convenience, but even they belong to a past era, having come from 18th and 19th century Bangkok palaces.

All the traditional religious rituals were followed during construction of the house, and on a spring day in 1959, decreed as being auspicious by astrologers, Jim Thompson moved in. The house and his wonderful art collection soon became such a point of interest that he decided to open his home to the public with proceeds donated to Thai charities and to projects directed at the preservation of Thailand’s rich cultural heritage. 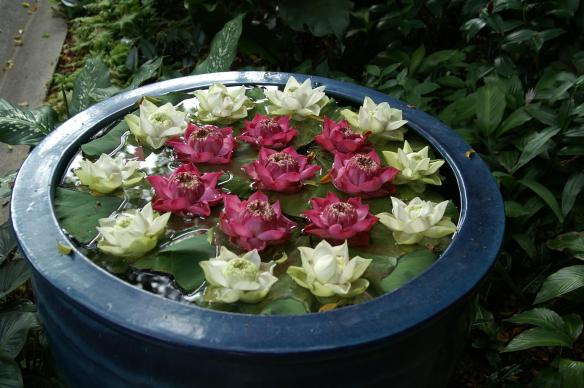 On March 26, 1967, Thompson disappeared while on a visit to the Cameron Highlands in Malaysia. Not a single valid clue has turned up in ensuing years as to what might have happened to him. He left back his cigarettes on a table in his room, that’s all what remained. People believe he got killed by tigers but there is no evidence about it. His famous Thai house, however, remains as a lasting reminder of his creative ability and his deep love to the country.