Brussels, Begramoff Gallery. The walls are decorated with stunning pictures in light orange, red and mystical dark colors. And in between there is Thép Thavonsouk, the Laotian-Canadian artists, dressed in a light silk dress and glad to greet all the visitors. I am also invited to his art opening in an arty quarter of the Belgian capital. 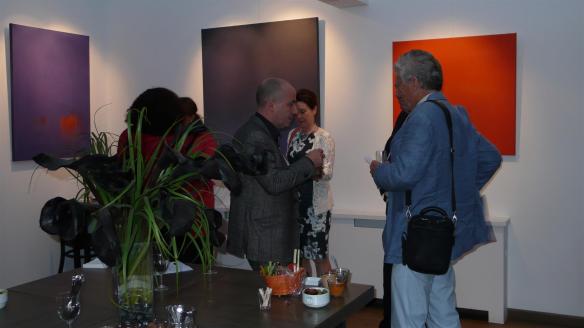 It is the first time Thép introduces his paintings to a Belgian, and to an European, audience. Most visitors here have cosmopolitan backgrounds, lived all over the world, worked at different places. Also Guy de Vleeschouwer, the gallery owner. Some time ago he met Thép in his gallery house in Luang Prabang in the lush northern part of Laos and was fascinated by his art. He invited him and his paintings to Brussels and everything started.

Talking with Thép is a pleasure for itself. He looks to his picture in a deep purple color and with the imagination of a lonely monk in it. And then he speaks: About his intention to paint, about the world and his longing to go back once in a while to his birth place Laos – despite of living for decades in Canada. To pay respect to his father and his mother, whose ashes are buried in the capital Vientiane. “I have to go there every year to find my inner peace.”

Then he finally refers to that one purple painting.

“In my opinion purple is a color of spirituality. I like to share it with my audience. It is time to look into ourselves and reach a sense of peace. There is so much chaos in the world. I just want to share a sense of humanity. There is so much sadness around, so many things which are going against my human being. I like to see people happy but lately I saw the opposite. There is now so much uncertainty in the world. As an artist I like to say that it is not bad to go on, just to go on. I hope when people see my art they can feel spirituality and peace and the positive way of living their lives.

I don’t want to see people living in a negative way. Light, one of the focus of my paintings, means to me happiness. This is my small way of saying that I hope there is peace and tranquillity wherever you are.”

Thép Thavonsouk’s plans for the future are easy to handle. “I like to enjoy every minute of what we have and keep on going painting 7 days a week.” The 68 years old artist adds that he is a passionate tennis player. His home for the last 48 years is Calgary in Canada. “It is there where I have my friends who became my family and where my only fight is that one at the tennis court”, he ends, smiling.