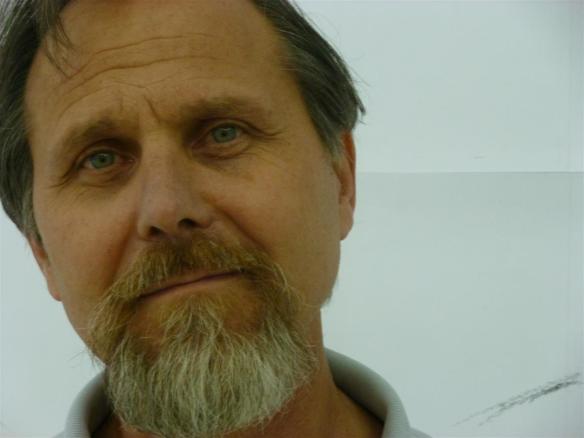 Originally, Mihai worked as a restorer in churches and specialized in religious paintings. He studied art in Timișoara (Temeswar) from 2009 to 2011. Now he focuses his work on portraits. He puts his effort of showing expressions and feelings of the various people he is working with. He showed his art in Switzerland, Germany, Israel, Spain, France and USA.

Now he lives in Brasov (Kronstadt) and presents his work there in the Galeriile de Arta together with his wife Claudia-Laura Zigman. 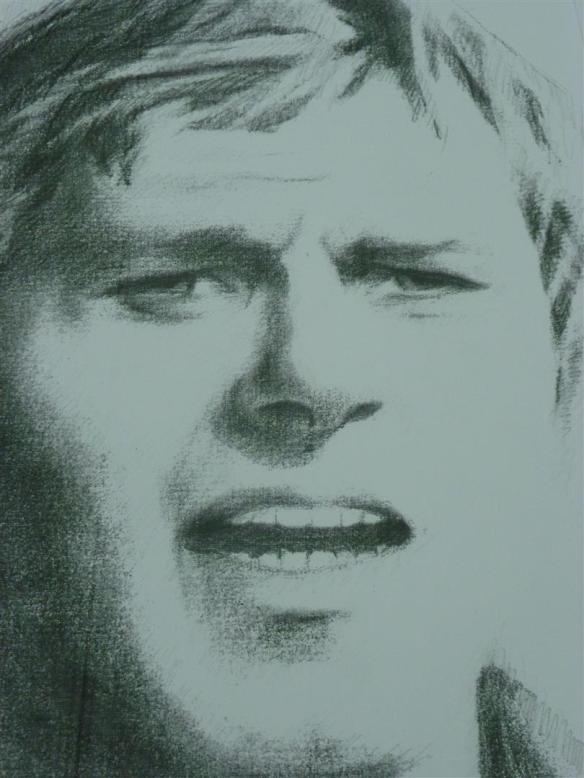 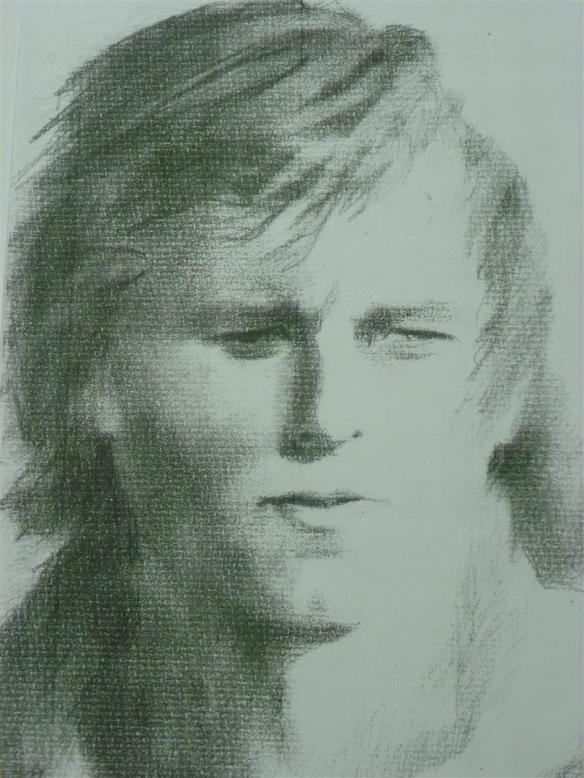 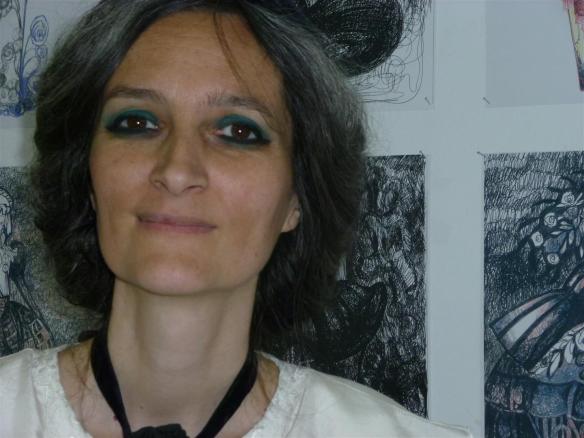 Claudia-Laura Zigman started her first exhibition in 1995. “In my art I put biographical issues as well as my special working techniques. Besides I wish that my audience recognizes my sensibility, my special way of being an artist and the combination of different colors.”

Claudia-Laura admits that she is restless, always looking for new inspirations, always searching for her way. In 2010 she got the first prize for her work The tin horse, honored by the city of Brasov (Kronstadt).

Till august 15, 2013 she presents in Brasov (Kronstadt) in the Galeriile de Arta her new exhibition The ninth sky. She cannot describe by words what she wants to express with her paintings full of fashion, beauty and melancholy. “This exhibition shows how much I like my freedom as an artist”, admits Claudia-Laura. “My pictures are a story without beginning and without end. I am still creating it!” 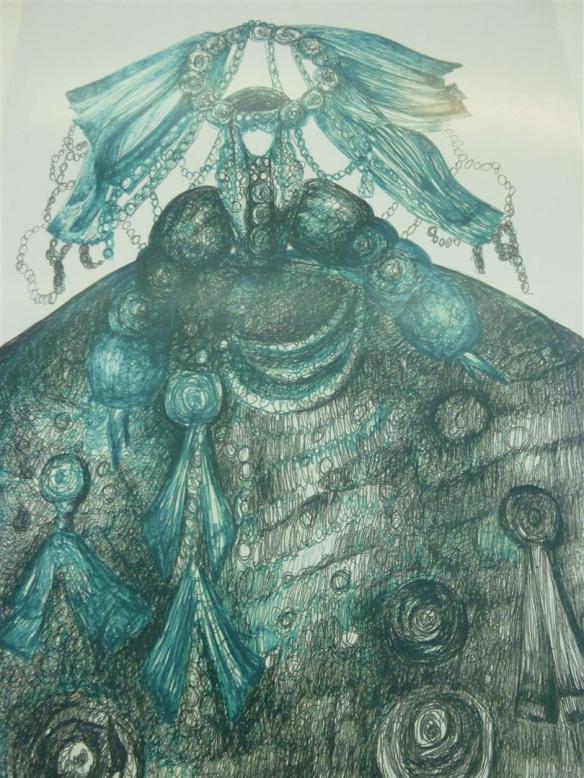 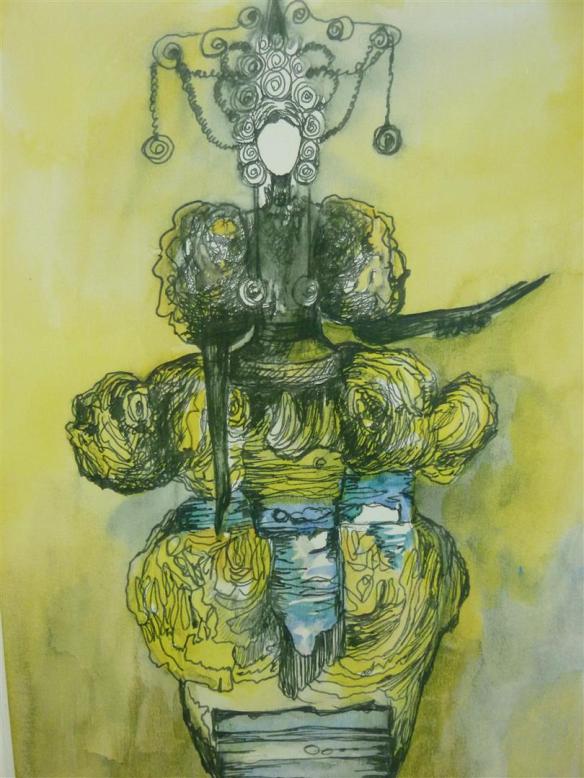 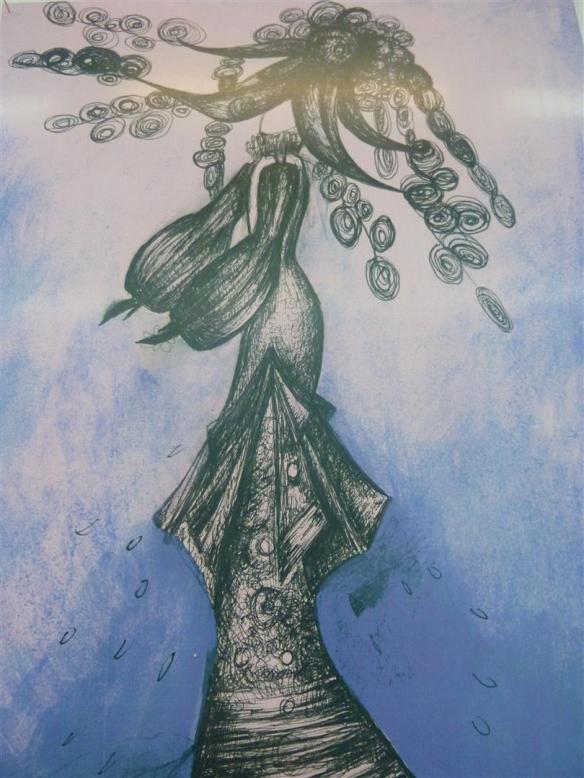 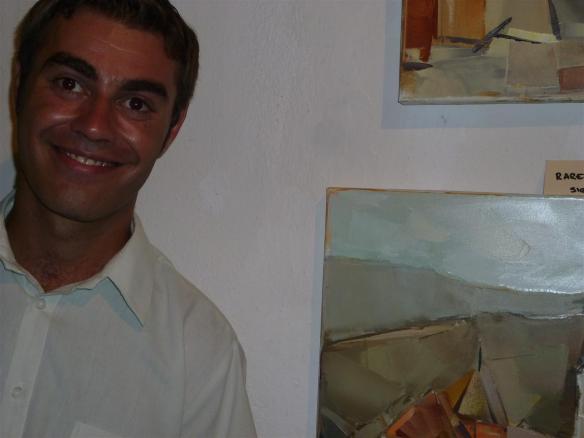 Modern, abstract, figurative and cubistic – that’s his style. Rares Kerekes can live from his art. Finally. It was not always easy for the young painter. Born in 1982 in Sighișoara he became first a high school art teacher. But all his life he has been fascinating by painting. In 2011, after six years working as a teacher he moved to Bucharest.

Finally living his dream: Being a free lance artist. “Sometimes it is very hard to live from your art, especially when you are young. But when you have a name and people start getting to know you, it is good.” Rares Kerekes talks about his life. “This was my way. I guess, this period now is the start of being an older artist”, he smiles. He knows how it is to be an unknown artist. Today this is past. “Collectors heard about me and started to buy my paintings.”

His inspiration he draws from the great artists of the past: Cezanne, Picasso, their landscape paintings. And he developed a new topic when he painted landscapes from Transylvania, called Between Mystic and Medieval. He likes to change his style. But always he has a message to the people who look at his pictures. “I want them to relax when they see my paintings, they should feel good!” After having exhibitions all over Romania and also in Bulgaria he came back to his birth place. The reason was a grant for artists. In Sighișoara he will work for some weeks, together with other artists. “It is a real challenge. I am looking forward for the exchange with my colleagues.” 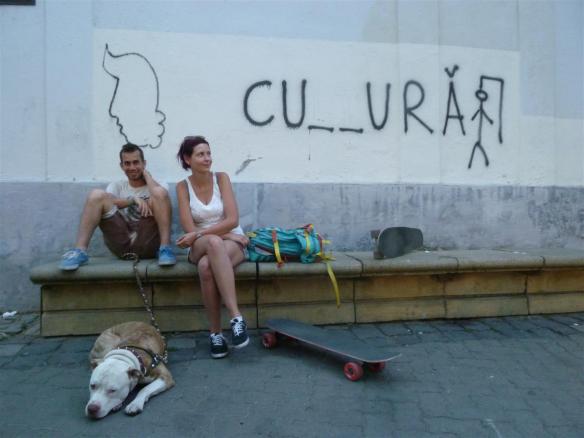 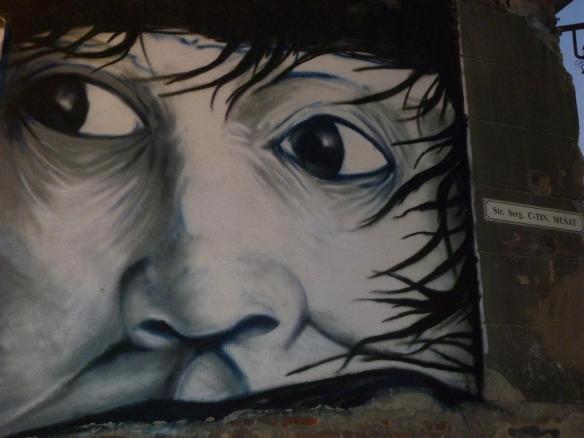 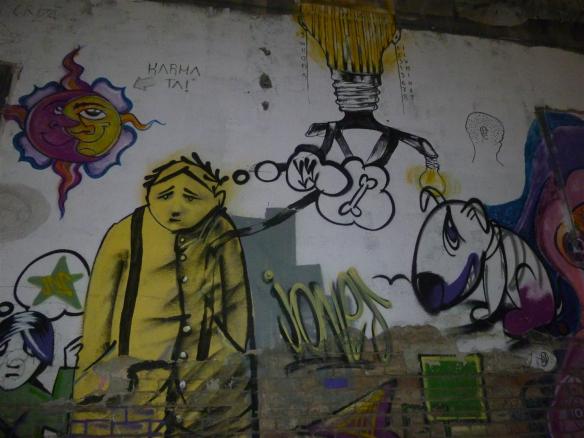 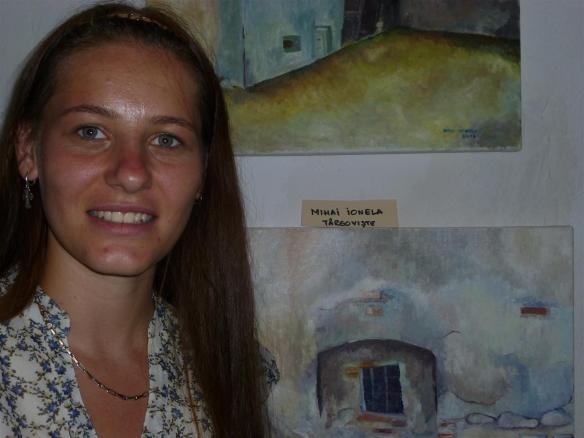 Ionela is a student of Mihai Șerbanescu and is participating in the group exhibition in Sighisoara. After completing art school in Târgovişte she studies engineering in Bucharest. But: She dedicates her life to colors. “I like to express myself by colors”, says the 21-year old painter and talks about her dreams: “Later I would love to live in Portugal or Brasil. Yes, in Brasil! Because of the carnival and the colors, which are magic. For me!” 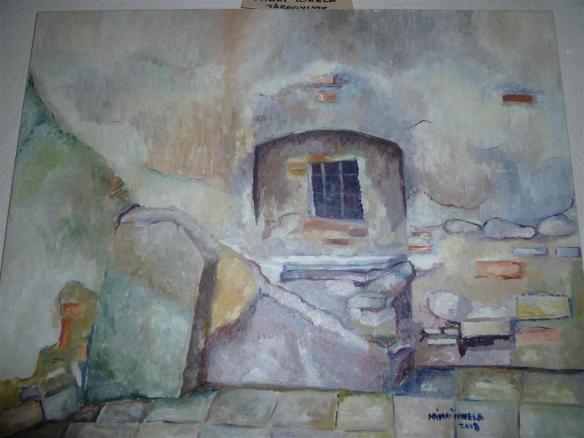 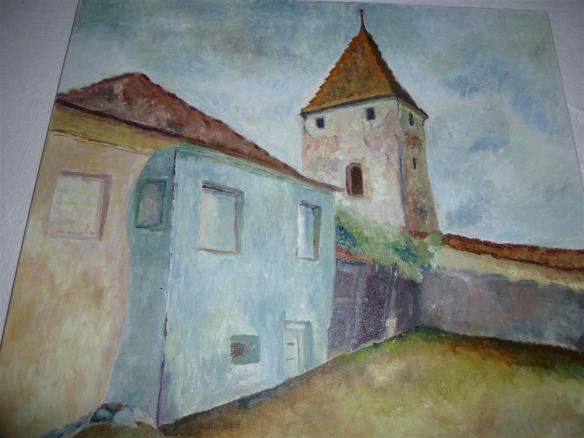 His favorite painters are Tiepolo, Caravaggio and Dali. After studying painting at the Academy of Fine Arts in Bucharest for six years he became an art teacher.

I meet him at an group exhibition in Sighisoara. The presentation is combined with a grant which allows him to work in that beautiful place for some weeks. „I will go to the streets daily. I will paint for at least 10 hours.“

When painting he forgets the outside world. “Important for me is to discover my emotions”, he says. And he gives a message to all the people who look at his art: “I like to let my paintings talk, let them develop energy for a long time. The people will have different emotions when they look at my pictures.“ 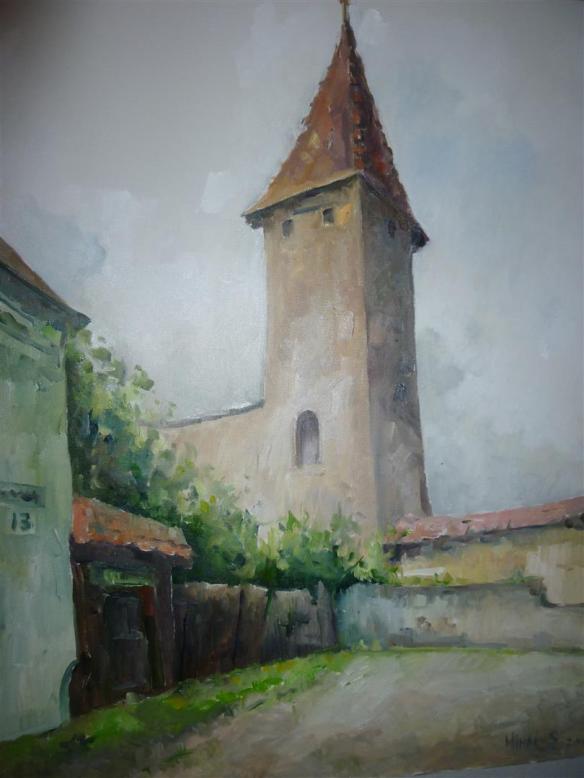 He was nine years old when he took his first lesson at the famous cemetery painter Stan Ioan Patras. He was a local carver who scrawled his first verse on a tomb around 1935 and recorded the village in poetry until his death. With him he studied for nine years. The master was looking for somebody who could continue with his art and he found that somebody in the young Dumitru. When Patras died in 1977, Dumitru overtook his work and became a famous gravestone painter. “I need about two to three months to finish a painting”, says the 57 year old artist. He doesn`t speak English but in his daughter Anamaria he has an excellent translator.

Dumitru with his daughter Anamaria, who is his translator during our talk.

“Except cemetery painting he also creates pictures. All he wants to do is naïve art”, says his 21-year old daughter. “I love to do the geometric paintings”, he admits. Family members of persons are coming to him or even people still alive come to him and order the colourful wooden crosses. Many crosses are painted at both sides, but it depends on the money, because the more pictures are on it the more expensive is the painting. 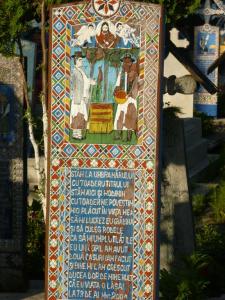 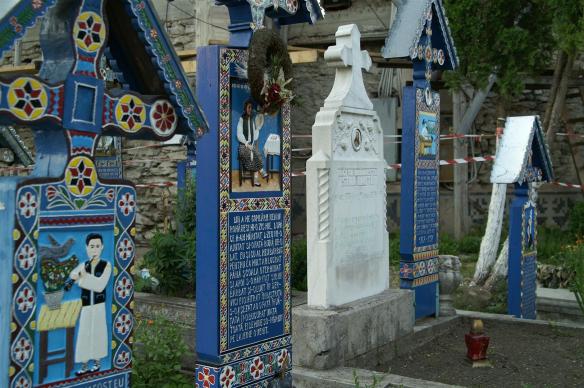 “Up to 500 Euro costs to illustrate one side of the cross, therefore many people can only afford one painting”, says Maia who works at the cemetery. Thus there are some crosses which only have paintings on one side.

The village of Sapanta is located in a forgotten corner of Europe, near the border with Ukraine. As soon as a citizen of Sapanta dies, Dumitru gathers his note book, chisels and paint brushes and prepares a poetic and pictorial homage of the deceased onto an oak grave mark to be soon in the Merry Cemetery beside the Church of the Assumption. The about 800 carvings are a festival of colors show the dead either in life or at the moment that death caught them, while the poems, mostly written in a simple manner, are a final apology for an often ordinary life.

The workshop of Dumitru. 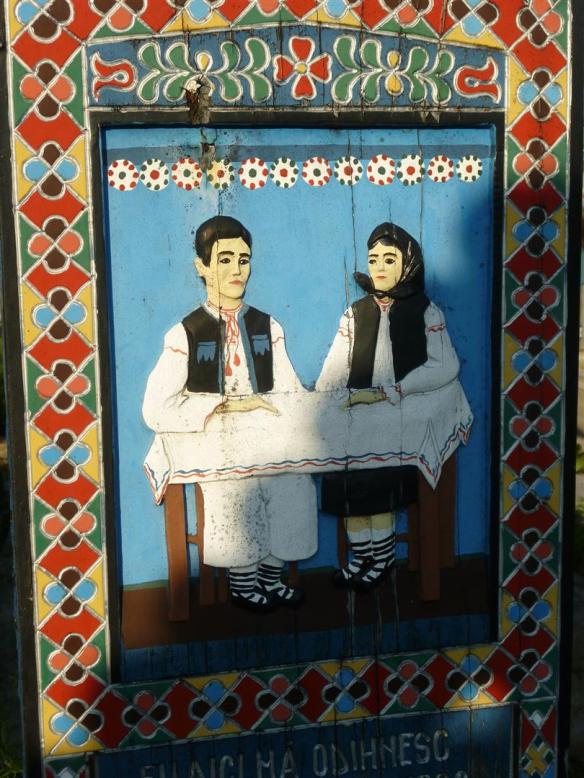 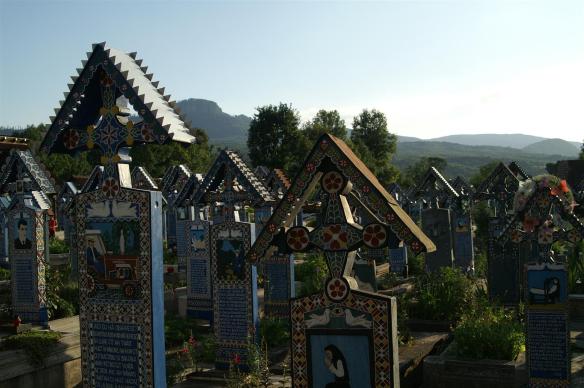 Master Stan Ioan Patras was an orphan, his father died during World War I. In 1935, at age 16, in order to provide for himself and help his brothers as well, he begins making crosses at the old cemetery on the Sapanta hill. The village was mined, and in order ot enter the village the people had to send their sheep ahead. Thus, many were sacrified to save human lives.

Stan Ioan Patras witnessed this suffering, which affected him deeply, and therefore, in the early years, on each cross he drew a sheep, whether or not the person buried there had been a sheep farmer, in appreciation for their sacrifice. 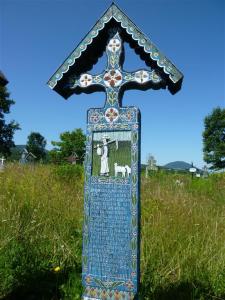 By drawing the sheep on the crosses Patras was able to “bury” them all. The cemetery was born from an obsession, from a creative spirit. Patras had become a master of death. Because the animals had been sacrified, people managed to defy death, surviving the war and its aftermath.

Master Stan Ioan Patras‘ room which is today a museum.